Mixing is going mobile and DJ apps for the iPhone are on the rise!

Mobile mixing makes sense on many levels. When we’re out and about, we may not be carrying our DJ gear with us, but there may still be an opportunity to mix.

For all these events and occasions, DJ software for your iPhone is more than just a novelty.

Mobile DJ software is also very useful for trying mixes on the go when traveling, or just for having a bit of fun on trains, flights, in hotel rooms, etc.

How Do DJ Apps Work?

You might be wondering about the functionality of DJ apps for the iPhone and other mobile devices.

Whilst it’s pretty tricky to shrink down a whole mixer and decks into what is essentially a tiny package, some apps do an extraordinary job of doing just that.

Can you expect to execute professional mixes from your phone?

Well, it’s not really the point to replace the entire DJ setup, but DJ apps are more than just gimmicks these days.

They offer some pretty impressive functionality including AI-powered auto-sync features. Some are also linked to SoundCloud Go, Deezer, iTunes, and other music platforms

Being able to execute mixes from your iPhone is very cool, and for parties, it’s a great way to keep the music rolling.

Anytime you need to mix between tracks with fluidity and precision, you can with a DJ app.

Without further ado, let’s check out the best DJ apps for the iPhone.

Djay is a DJ software suite for iOS, Windows and Android.

It works on both iPhone, and iPad, so is ideal for portable DJ mixing across many platforms. It’s an established app that has a pretty large dedicated user base and provides streaming from Beatport Link, iTunes, Tidal and Soundcloud Go+.

The iPhone app also lets you use 25 tracks from your own phone storage.

There are two jog wheels with auto-detection, adjustable BPMs, a mixer panel and AI-powered auto-mix features. You’ll see waveforms of your tracks and will be able to drop them on beat before syncing them up and mixing in/out.

It comes with Djay’s ‘Neuromix’ AI which can isolate different parts of tracks to create remixes on the fly.

The most important thing is that it works, and works well. Definitely more than just a gimmick – Djay is an excellent AI-assisted iPhone DJ app with a suite of cool innovative features.

Djay is a free app with in-app purchases.

For anyone that has used any DJ software, djay’s UI will be intuitive and easy to use. The first step will be syncing your tunes from streaming services. You’ll be able to create and store sets too.

Simply connect it up to some speakers via an AUX jack or Bluetooth and you’re good to go. 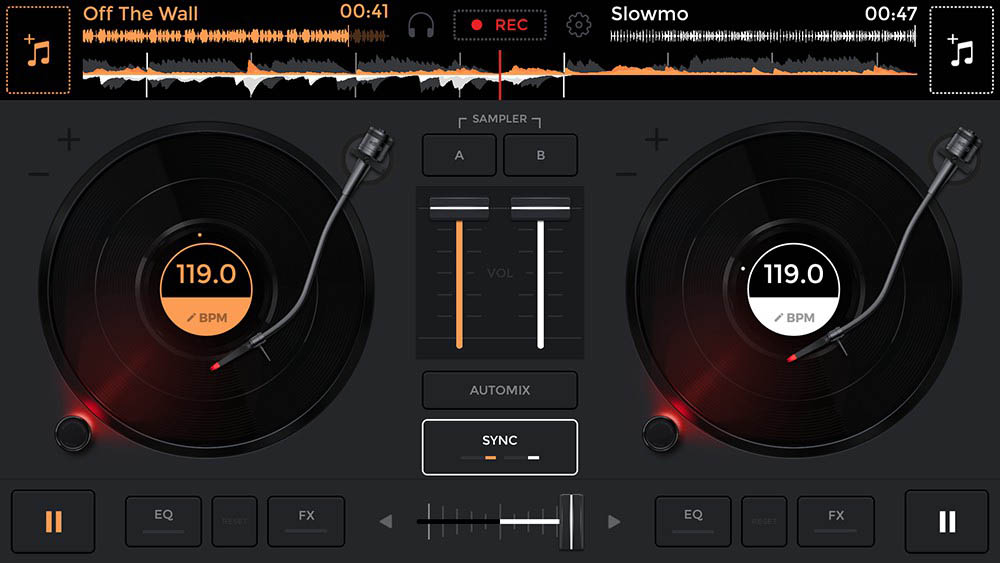 Edjing is probably the main competition to Djay. It’s very similar in its core functions, offering two digital jog wheels with automatic BPM detection, a mixer section with channel and crossfaders, and even an FX panel.

It works with music from SoundCloud Go +, iTunes and cloud services like Google Drive, which is awesome. You can also access tunes saved on your phone, which is a big plus.

You can create and save sets for recalling later and there’s an intelligent and accurate continuous sync feature. As with other DJ apps, the idea is to create a mix of similar genre tracks and then mix between them in sync, adding some FX as you go.

Going above and beyond that will be tricky, but with practice, you can execute some awesome manual mixes.

For that, it’s a really effective app and you can even cue mixes with headphones. You can also record your mixes and there’s a built-in sampler, hot cues and looper.

An excellent all-rounder for parties and mixing on the go.

Edjing is a free app with in-app purchases, namely FX and the headphone cue function amongst other features.

It’s pretty simple to use Edjing and the sync is reliable, which is a major thing. Once you load up your tracks and create some sets, all you need to do is operate the mixer section whilst adding some FX to the music. Pacemaker is an AI-driven music mixing and mash-up app for iOS. It integrates with Spotify, even despite the Spotify API shutdown in 2020. It also works with Apple Music/iTunes.

By streaming tunes to the app, you can use its AI-powered interface to mix melodically and auto-sync tracks. It’s supposed to be pretty much fully automated, so don’t expect the same level of manual control as you get with other apps.

The point of Pacemaker is clearly to mix tracks at parties and other casual events (no matter what state you’re in!), and it excels at that. It’s intuitive and you do have access to a mixer with looping and FX. You can even scratch tunes.

Overall, Pacemaker is a powerful app that still accesses Spotify (according to their website as of 2021). This is a big plus if you want to mix tunes directly from your Spotify Pro subscription

Pacemaker, like most other options, is a free app with in-app purchases. There’s also a subscription service that lets you access tunes from Pacemaker’s own database (they will likely cease their relationship with Spotify like other DJ apps did in 2020).

Pacemaker’s interface is high-tech and simple, but there’s a fair few functions to investigate. It’s definitely one of those apps you’ll have to experiment with as it’s not exactly traditional in its approach.

This classically styled DJ app for iPhone ticks all the major boxes. The interface is simple, you can use tunes from your own phone, iTunes or Soundcloud Go.

Cross DJ doesn’t do anything more than attempt to emulate an actual DJ setup with decks and a mixer. You have two jog wheels with auto-detecting BPM, sync mode and FX. All functions are straightforward to access and use from within the app.

The app will even analyze the key of tracks so you can mix melodically. There’s a built-in sampler too, and an impressive auto-mix function.

A very solid, classic-style DJ app that will enable you to execute some excellent mixes on the go.

Again, this is a free app with in-app purchases. The basic free version is decent but you won’t get access to any FX or the sampler.

Cross DJ is very intuitive to use, and that’s its main advantage. For DJs that have used any typical DJ software, it’ll be easy to get started with.

The basic procedure will be to mix tunes with the sync function and mixer, whilst adding some FX and other embellishments as you go. It’s unclear whether or not Deej syncs with any streaming software right now (due to ongoing licensing issues in the DJ software community). But, it works with music from your phone, so as long as you have a catalogue of pre-downloaded music on your phone, you’re good to go!

Deej has a simple but effective UI that combines all your expected DJ features. There are jog wheels with auto-detect BPM, a mixer section, decent FX, looping features and a sampler.

One innovative feature is the tutorial which teaches new users how to use the app.

Overall, Deej doesn’t try to do anything too flashy, but it’s another solid DJ app to download and consider.

Deej costs $5.99 but there are minimal in-app purchases, making it one of the most cost-effective DJ apps around.

Deej is really easy to use. The tutorial will take you through the app’s main functions. World-acclaimed DJ software Virtual DJ released Virtual DJ Remote some time ago, giving users of the software the ability to monitor mixes away from their PC or laptop.

Virtual DJ Remote will only work with the main Virtual DJ software and connects to it over WiFi. You can use it to control the mix, including putting on new tunes, syncing them and mixing them in. It does essentially allow you to control the whole mix from your phone, even FX, an equalizer, mixer and even a sampler.

It’s worth remembering that it only works in combination with a laptop installed with Virtual DJ, as it will use your music database from there.

Virtual DJ Remote costs $9.99. You will also need to subscribe to Virtual DJ itself.

Once you’ve set up Virtual DJ Remote with your Virtual DJ setup, it’s fairly easy to use. Whilst you can control the entire mix wirelessly from the app, it’s best used when you have to leave the DJ booth for a bit (e.g. toilet or beer breaks during functions).

DJ apps for iPhone have come on leaps and bounds and many allow you to execute some impressive mixes directly from your phone, all without hardware.

From Djay and Pacemaker’s advanced AI-driven DJ apps to Deej, Edjing and Cross DJ’s robust, classic-styled interfaces, there’s clearly something here for everyone to get stuck into!